Skip to Content
Home Blog Creative expressions In Light Of Is

A short indie film I wrote and directed about two sisters who find a flicker of magic in the world.

What I love about filmmaking is that it isn’t just about you. Actually, it isn’t about you at all. The collaborative spirit of moving the story forward is a collective, creative unravelling of selves that edits, evolves, and transforms the story every single step of the way.

So you write a screenplay. And you actually like it. That in itself deserves an award. For me it was ‘In Light of Is’, the first short film I’d written that I actually felt brave enough to share with the world.

Of course writing a screenplay is all about rewriting the screenplay, so you start editing like crazy. You polish. You delete. You change. You gaze out windows, drive yourself up walls, and haunt yourself in your sleep. Generally, you obsess. And then finally, you think it’s done. You think you’ve taken it as far as you can. You think you know the whole story. You feel like you’re ready to make a movie.

The casting begins and you’re lucky enough to get your first choices (for In Light of Is it was Taryn Sudding and Thandi Puren). You spend hours, weeks, months, talking about hair and makeup and wardrobe, backstory, psychology, story arc and character motivation. You dive deep into story and you find that the actresses know something about the characters that you didn’t. You hear what they have to say. You trust the story. And the story evolves.

You start storyboarding, putting your vision into pictures on paper (even if they’re just stick figures), blocking the action, choosing the angles, defining the composition. You find actions, lines, moments, or beats that suddenly just don’t work anymore when you start lifting them off the page. Because film is not paper. And you get out of the way. You have to. It’s your duty. You delete. You edit. You change. And the story evolves.

When you’re refining production design, and you’re finally locking off locations, colour palettes, set dressing, wardrobe… you find that all these things become characters in themselves, some big, some small, and the story grows a whole lot more. It starts becoming something immensely bigger than you, something outside of yourself, like a rolling snowball gaining in speed and energy and vitality, hurtling towards the light. And you let it. You trust it. The story evolves.

And then suddenly you’re shooting. The lights are set, the cameras are rolling. The actresses bring your imaginary friends to life in a mad rush. Everything becomes very real and utterly unreal all at once. It’s a magical process. And again, as things unroll, unravel, pull together and pull apart all over again, you find the things that work and the things that don’t. And the story evolves.

Then the moment comes. It’s inescapable. You call it. “It’s a wrap.” You say. You celebrate. Of course. You got it all in the can. You pulled it off. Somehow. Despite the fact that it rained whenever you shot outdoors, that equipment malfunctioned, that interns didn’t bother to pitch, and you ran over schedule and the light ran out and everyone had to work beyond midnight again and again and again. You still got it all in the can. You party. You collapse. The cast and crew go home. You strike the set. You get some sleep. But the story’s not over. In fact, it’s only just begun.

Now you piece the story together all over again. Random moments shot out of sequence that all have to finally make sense to an audience that doesn’t know the first thing about the story you’re trying to share.

There’s a reason they talk about ‘cutting’ in editing. Whole scenes land up on the cutting room floor. You capture so many beautiful moments. A perfect light. An exquisite performance. A look. A sound. A beat. But no matter how incredible it is, if it doesn’t serve the story, it has to go. Your editing can change a drama into a comedy. A meandering brook to a full throttle deluge. You edit offline. You edit online. You work with poets in cutting and colouring and special effects. And through them, your story evolves. It comes to life.

But the story’s not done with you yet. There’s original music composition. Music that gives your film a voice it never had before, music that pulls at the strings of your soul with a just tiny a dance of notes. And sound. The unsung heroes of film. The artists who make a whisper sound like a scream. Who make the tiniest moments momentous. Who fill the gaps in our world that we didn’t even know were there. And the story evolves. And evolves.

Until finally you have to let it go.

There is no more you.

There is just the story.

Roger Titley at Beyond the Moon

Vanessa De Sousa at Beyond the Moon

In Light of Is, a short film written and directed by Sabine NLD Bittle, is presented by Sinkwa Productions.

Writer, occasional filmmaker, published ghostwriter, mental health advocate, and artist reawakened, I’m obsessed with the story of who we are … and who we could be.

Let’s get in touch! 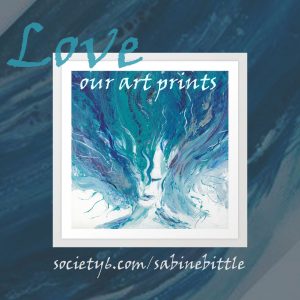 What She Said:
My mental health journey.